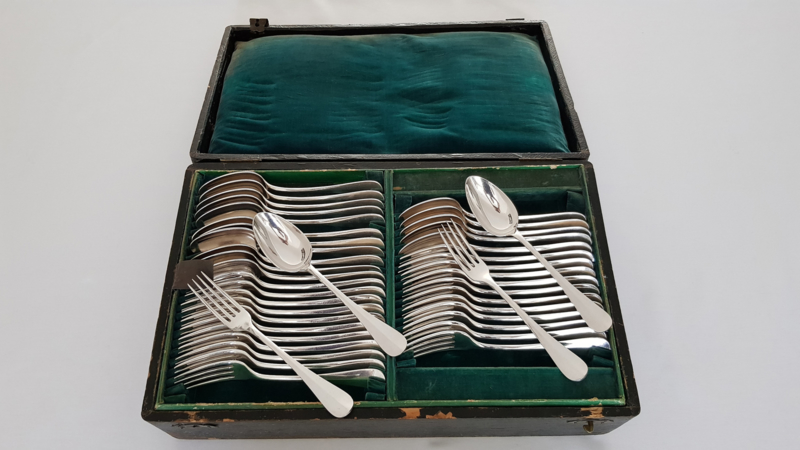 This rare cutlery box was a unique find for us. Not only because it is 130 years old, but also because the cutlery was produced by the company Vve. (Widow) Charles Halphen, one of the original - 19th century - business partners of the famous Christofle. The box and its contents can be dated to around 1890.

The cutlery parts are still in good condition for their age. There is slight scratching from use, but no damage is present.

* The serving spoon is from WMF. This bears the WMF maker's mark from before the 20th century. Because we suspect that it was also added during that period, it was decided to leave it included in the set.

Around 1850, Charles Halphen, a Parisian silversmith, discovered an alloy of copper-zinc-nickel and iron; called Alfenide. This silver white metal was perfect as a base material for silver plated pieces. When the silver layer had worn away, it was not very noticeable due to the silvery color of the underlying metal. Christofle quickly recognized the usefulness of this. Until then, the French silver house mainly used brass as a base; a gold-like color that became immediately visible when worn. From that moment on, all Christofle cutlery parts were first produced at Halphen in Alfenide, after which it was silver plated at Christofle itself. This partnership lasted until 1878, when the roads of Christofle and Halphen separated and the company continued on its own. Because the company was smaller - and therefore could not compete with the much larger and better known Christofle - its production had always been smaller, with the result that remaining cutlery parts are much rarer today.