Georg Nilsson was a Danish designer of silverware, known above all for his work for the Dutch Gero company. Tutored by Georg Jensen in Copenhagen, he was appointed the designer for the Danish Gero Factory in the 1920's. The pieces produced were for the Danish market and very distinctive in their design. After the crash of 1929 the Danish Gero branch was forced to scale down and eventually transferred its operations in 1933 to Zeist, Netherlands.

Nilsson moved as well and continued designing for the company. Nilsson designed many of Gero's most well-known and acclaimed flatware patterns, and pieces with his signature [GN] stamp - although not exactly rare - are nonetheless cherished by collectors. 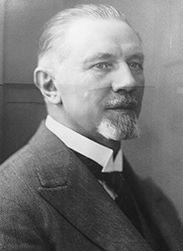